Examples of Miracles from History and Personal Experience

One of the most famous examples of miracles that are not part of the sacred texts of any religion are the healings at the Roman Catholic Shrine of Lourdes. According to tradition, in the mid-19th century, a French girl called Bernadette prayed to be healed and a spring of water came out of the ground. She drank from the spring and was healed. Nowadays thousands of Catholic pilgrims flock to the shrine of St. Bernadette at Lourdes to be healed.

The Catholic Church takes any claim to be healed very seriously indeed and investigates each potential miracle using a team of scientific experts. To date, the Church has declared 68 of these healings and miracles as no explanations can be found as to why the people concerned got better!

Many of the claimed miracles have turned out not to be miraculous at all. A person who was taking tablets for a condition stopped taking them and it turned out that it was those tablets making them sick. They thought it was a miracle cure but there was a normal explanation. Others were under treatment and this explains why they got better. It could be that in the 68 cases the Church mentioned, there was an explanation but they just couldn’t find. 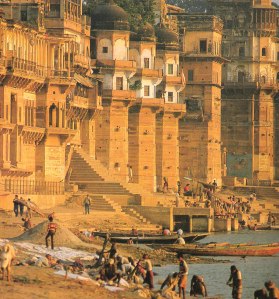 Varanasi is a town in India on the shores of the sacred river Ganges. According to tradition it is where the god Shiva is supposed to have lived. Hindus bathe in the river at the site hoping that they will be washed clean of all of their sins. Many hope to be cured of physical illnesses as well. Many claim to have got better from fatal and incurable diseases after bathing at Varanasi.

Like the healings at Lourdes, it could be that there are other explanations. People do get better, and many are also taking medicine. It may be that these are not miracles at all, and of course, many are not healed.