The Problem of Evil and Suffering 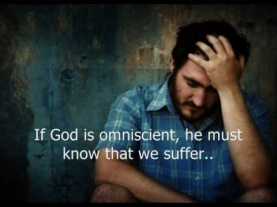 In most theistic religions (religions which believe in God, so all six except for Buddhism), God is described as being omnipotent, omniscient, omnibenevolent and omnipresent. So why does the existence of suffering cause problems for this description of God?

The Inconsistent Triad is an Atheist argument which explains why the existence of suffering is a problem when considering the existence of God. It analyses God’s characteristics and evaluates their validity when thinking about suffering.

It states that God cannot exist if suffering does, because the existence of suffering means that He cannot be omnipotent, omniscient, omnibenevolent or omnipresent.

Why is suffering a problem?

The existence of suffering causes believers to question God. For example, why don’t you try and answer the questions below;

1. If God is omnibenevolent then why does suffering happen to good people? Is God loved everyone then He would step in and stop suffering (a bad thing), from happening. The fact that suffering exists means that He cannot love us.

2. If God is omniscient then He is supposed to be all knowing. If He is all knowing then He knows that suffering occurs in the world. So why does He allow it to continue? Does God will this to happen?

3. If God is omnipotent then He is supposed to have the power to stop evil from happening. The fact that it still happens means that He has not yet stopped it. Is this because He can’t stop it?

The problem is God has to be all of the ‘omni’s’ and if He is not, even if it is that He is not just one of them, then by definition He cannot be God and so doesn’t exist.

On the other hand some religious believers would argue that evil and suffering do not exist because of God, but rather because of humanity’s free will. We commit a sin and we are supposed to learn from these and commit good ones in the future.